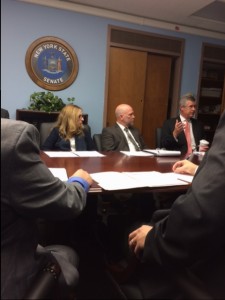 On November 2, Government Relations Committee (GRC) members from across New York State convened in Albany to meet with legislators, the governor’s office, and the State Education Department (SED) to discuss current matters and anticipated issues for the upcoming legislative session. In addition to GRC members, the SAANYS delegation included the association’s recently inducted board of directors president, Paul Fanuale; colleagues representing the Yonkers, Buffalo, and New York City school districts; Thomas Payton, principal of the Roanoke Avenue Elementary School in the Riverhead School District; and Cynthia Gallagher, who will transition to the position of government relations director in January.

The full complement of school administrator representatives met with Governor Cuomo’s deputy secretary for education, Jere Hochman, and with high-ranking representatives of the following state legislators [all of whom won reelection on November 8]: 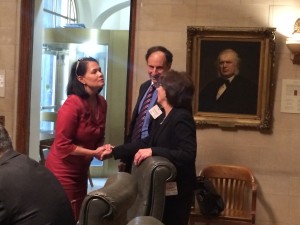 In addition to inquiring about expected priority issues of the Executive and legislators for the upcoming legislative session, the school representatives raised four areas for discussion:

The Great Recession has not ended for many school districts and it is imperative that full funding of the Foundation Aid Formula – still under-funded by $3.8 billion – be meaningfully advanced. Coupled with this is the recommendation to revise the Property Tax Cap, which the general public understands to be 2 percent, to allow for a consistent 2 percent increase; with a revision of the criterion needed to exceed the tax cap, requiring a majority vote in support, rather than a super majority (60 percent) vote in support. At each meeting, and especially at the meeting with Senator LaValle’s office (representing the Port Jefferson area of Long Island), Thomas Payton emphasized the need for additional fiscal support for the provision of services to English language learners because of the growing numbers of such students and the unfunded mandates contained in amendments to Part 154 of regulations; and additional funding to meet the needs of recently immigrated students, some of whom speak indigenous languages with no written format and who have limited or no formal education prior to arriving in the United States.

There is no benefit to continuing such accountability designations beyond the point when schools have achieved performance levels that will allow for removal from accountability status. Parents are inclined to withdraw the most academically capable students from such schools, and many skilled teachers and school administrators avoid assignment/employment in such schools. In addition, all the school districts in which such schools are located are under-funded in terms of Foundation Aid. Recognizing the concerns of the governor’s office regarding the removal of such schools from the accountability list and the continuing fiscal needs of such schools, the SAANYS group recommended a Contract for Excellence approach for funding. Through this approach, the schools would remain off the accountability list but would provide a plan for the use of continued funding, to be approved by the SED and/or the governor’s office. The deputy secretary informed the administrators’ group that the matter is being litigated and that such compromise positions will not be considered.

Recognizing that the ESSA State Plan to be submitted to the US Department of Education in July 2017 will first have to be approved by Governor Cuomo, the GRC discussed several “High Concept Ideas” that must be addressed in New York State’s plan, including:

• For High Concept Idea 1, regarding the 95 percent state test student participation requirement, the GRC recommended that New York State NOT adopt any of the three punitive “rigorous actions” put forth by the USDOE. It is our position that a rigorous action need not be punitive. Therefore, it was recommended that schools that do not meet with the 95 percent participation requirement should submit a plan to the State Education Department describing the reasonable actions that will be taken to promote increased student participation in state tests.

• For High Concept Ideas 5, 24, 25, and 26, regarding English language learners, support was expressed for the SED proposals to avoid over testing such students (i.e., to not require the administration of both the state ELA test and the NYSESLAT in a single year); and to allow ELL students three to six years (or longer if appropriate) to become English proficient.

• For High Concept Idea 23, regarding the Title IIA program, it was recommended that New York State adopt the ESSA provision allowing state education agencies to set aside 3 percent of professional development funds for principals and other school leaders.

Currently there are seven preschool programs in New York State, with differing program requirements and differing degrees of funding stability. The availability of prekindergarten services is far from “universal” for children four years of age; with a 63 percent statewide participation rate, and regional participation rates ranging from 87 percent in New York City to 32 percent on Long Island. School administrators recommended that the seven programs be amalgamated into a single program in a manner that does not disadvantage current programs or currently enrolled students, with enhanced funding for more equitable availability statewide.

The 3 to 8 assessments scheduled for administration in 2017 will employ all the same procedures that were used in 2016, including a review of each test item by 22 or more educators. The senior deputy commissioner informed the group that guidance will be developed in regard to the procedure permitting students to continue testing so long as they remain productive – and school administrators requested to review such guidance prior to it being finalized. The GRC also recommended guidance in regard to students who opt-out of one part or two parts of the three-part ELA and mathematics state assessments. In 2016, school administrators received inconsistent information from SED representatives: in some cases being told that administration of one part or two parts constitutes a complete administration for scoring and accountability purposes; in other cases, administrators were informed that such students may be reported as “absent”; and in other cases, school administrators were told that such students may be reported as “misadministrations.” It was recommended to SED that any student who opts-out after one or two parts of the state tests should be reported as an opt-out for the entire test since opting-out would clearly be the intent of student’s family and because a score based on one or two parts of a three-part assessment would be invalid and unreliable.

For additional information regarding the November meeting of the Government Relations Committee, or issues discussed at meetings with the governor’s office, with state legislators or with the State Education Department contact James Viola, director of government relations, at JViola@saanys.org.