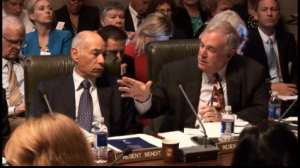 At its June meeting, the Board of Regents discussed and passed action items in regard to Annual Professional Performance Review Regulations, school receivership regulations, and regulations necessary to implement to new tenure and probation requirements contained in the Budget Bill.

Commented SAANYS Executive Director Kevin Casey, “The actions by the Regents to implement a four-month hardship extension for districts is significant as districts attempt to work with an evaluation law that shortchanges both students and teachers. In the end, however, we still have a law that puts too much emphasis on test scores rather than student and teacher growth and development. We urge the Board of Regents to join educators as we continue to fight for a fair, well-thought out evaluation system.”

Before Senior Deputy Commissioner Ken Wagner began his presentation of the Regents action item and slide deck (attached), Regent Finn asked that the white paper developed by seven Regents serve as “the” document guiding discussion. Regent Cottrell expressed some frustration, indicating that some members of the Board had not been asked to participate or to sign the document. Regent Rosa responded that the white paper was sent to all members of the Board, twice, and that the only additional members who responded were Regents Tilles and Young. Nonetheless, the full board acceded to the request of Vice Chancellor Bottar to allow Mr. Wagner to present the department’s recommendations, with the understanding that the contents of the white paper would receive full consideration. At the bottom of page 2 of the slide deck, Mr. Wagner stressed the point that, “Although emergency adoption will occur in June, changes can be made in September following the public comment period. The regulations can continue to be adjusted over time as additional best practices emerge.” The Regents decided that:

Many Regents expressed continued consternation with the APPR system. Regent Tilles said, “There’s a lot of baggage that’s accumulated over the last four years, and there is poison in the system. We have to do the best with what we’ve been asked to do, and that is to tinker with the system.” Regent Young said, “We have an obligation to exercise leadership and say [in a letter to the governor and legislature] what we think should be done.”  Five members of the Board of Regents did not vote in favor of this item. They are: Regents Cashin, Chin, Ouderkirk, Johnson, and Rosa.

For Receivership, both the BOR Receivership Slide Deck June 2015 and Regents item are attached. Many Regents expressed concern with the Receiver procedures, and upon an initial vote, the regulations did not pass. However, upon learning that if the item did not pass it would not be possible to allocate $75 million in the budget bill to Persistently Struggling Schools, a new motion was made and the item passed unanimously.

The Tenure and Probation Action Item (attached) was presented by Deputy Commissioner John D’Agati. The regulations, which passed unanimously, pertain to expedited hearings in relation to teachers and principals rated Ineffective two or three times consecutively. No information was presented in regard to the registration and continuing education procedures that will be effective in 2016-17.

Regents Common Core-aligned Examinations – Also attached is a slide deck andDiscussion Item that was presented to the Board of Regents in regard to the migration from partial proficiency (level 3, equating to a score of 65) on Regents common core-aligned examinations to proficiency (level 4, equating to 74 Algebra / 79 ELA – formerly 75 / 80) required for high school graduation by the 2021-22 school year. Chancellor Tisch curtailed the presentation and discussion of this item saying that it should be held until Commissioner MaryEllen Elia formally begins her employment at NYSED. This means that no plan of schedule is in place for the transition to proficiency standards. SAANYS has previously recommended a “light switch” approach to this transition, rather than year-by-year revisions.