On January 21, 2020 Governor Cuomo presented his proposed state budget. SAANYS subsequently participated in several budget briefings and the following is a summary of the education portion of the proposed executive budget for 2020-21 based on SAANYS’ analysis and discussions.

The proposed state budget is being offered as a budget that “equalizes disparities, which directs funding to poorer schools and not just a district. In an attempt to decrease disparities, the proposed budget targets 85 percent of the Foundation Aid increase to highest need districts. In doing so the governor has proposed revising the formula to more evenly distribute funds. In the proposed budget this is accomplished with new tier formulas and reducing the current ten tiers to five.

Overall the 2020-21 proposed budget increases total aid to districts to $28.5 billion, which is a $826 million increase over last year. Of this increase $504 million is directed to Foundation Aid, however the increased aid is directed to the highest need districts.

Other substantial changes have been proposed in regard to expense-based aid. The proposed budget recommends that 10 categories be folded into Foundation Aid. Additionally, it creates a new tier for Building Aid for projects approved on or after July 1, 2020. SAANYS has asked for clarification as to whether approved means SED approval or public approval through budget votes. The stated intent is a desire to rein in the use of such funding for athletic fields or other “incidental costs.” For the school year 2021-22 a proposed cap on transportation expenses has been included as well.

The table below summarizes the proposed 2020-21 funding. CLICK ON TABLE TO ENLARGE 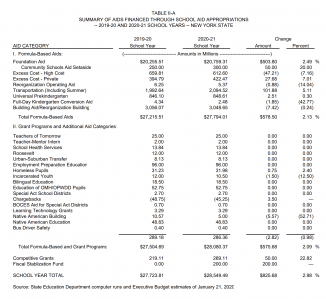