The State Board of Regents convened in Albany on December 14 and 15 – it was a busy meeting and included a review of, and action on, the 21 recommendations issued by the governor’s Common Core Taskforce. A summary of important discussions and actions follows:

1. Governor Cuomo’s Common Core Task Force – On December 10, Governor Andrew Cuomo’s Common Core Task Force issued its final report and recommendations. In announcing the release of the report, Governor Cuomo said “…the task force has made important recommendations that include overhauling the Common Core, adopting new locally-designed high quality New York standards, and greatly reducing testing and testing anxiety for students.” The governor also said, “The Common Core was supposed to ensure all of our children had the education they needed to be college and career ready – but it actually caused confusion and anxiety. That ends now.”

Richard Parsons, who was the chairperson of the 15-member task force, reported that information was received from more than 2,100 students, parents, teachers, administrators, and other education stakeholders. On behalf of the task force he said,”While adoption of the Common Core was extremely well intentioned, its implementation has caused confusion and upheaval in classrooms across New York State. We believe that these recommendations, once acted on, provide a means to put things back on the right track and ensure high quality standards to meet the needs of New York’s kids.”

At the Regents meeting, Commissioner Elia reviewed each of the 21 recommendations issued by the task force, along with a description of the actions already taken or planned by the department as follows:

Recommendation 2 – Modify early grade standards so they are age appropriate.

Recommendation 3 – Ensure that standards accommodate flexibility that allows educators to meet the needs of unique student populations, including students with disabilities and English language learners.

Recommendation 4 – Ensure that standards do not lead to the narrowing of curriculum or diminish the love of reading and joy of learning.

Recommendation 5 – Establish a transparent and open process by which New York standards are periodically reviewed by educators and content area specialists.

Recommendation 6 – Ensure educators and local school districts have the flexibility to develop and tailor curriculum to the new standards.

Recommendation 8 – Launch a digital platform that enables teachers, including pre-service teachers and teacher educators, to share resources with other teachers across the state.

Recommendation 10 – Involve educators, parents, and other education stakeholders in the creation and periodic review of all state standards-aligned examinations and other state assessments.

Recommendation 11 – Gather student feedback on the quality of the new tests.

Recommendation 12 – Provide ongoing transparency to parents, educators, and local districts on the quality and content of all tests, included but not limited to publishing the test questions.

Recommendation 13 – Reduce the number of days and shorten the duration for standards-aligned state standardized tests.

Recommendation 14 – Provide teachers with the flexibility and support to use authentic formative assessments to measure student learning.

Recommendation 15 – Undertake a formal review to determine whether to transition to untimed tests for existing and new state standardized tests aligned to the standards.

Recommendation 16 – Provide flexibility for assessments of students with disabilities.

Recommendation 17 – Protect and enforce testing accommodations for students with disabilities.

Recommendation 19 – Prevent students from being mandated into Academic Intervention Services based on a single test.

Recommendation 21 – Until the new system is fully phased in (or until the start of the 2019-2020 school year), the results from assessments aligned to the current Common Core Standards, as well as the updated standards, shall only be advisory and not be used to evaluate the performance of individual teachers and students.

It should be noted that the regulations require SED to develop guidance in connection with the new requirements. SAANYS will continue to confer with the State Education Department to further clarify transition procedures to be included in forthcoming guidance from SED and from SAANYS, and to identify necessary revisions to the regulations, which are now posted for public comment. The item will be presented to the Board of Regents again in March for adoption or revision. The following information is based on SAANYS’ initial review of the regulations in their current form.

The presentation and discussion at the Regents meeting gave many the misimpression that the new regulations pertain only to student performance on the grade 3-8 English language arts and mathematics tests. This is NOT the case. The transition provisions pertain to teachers and principals at the elementary, middle and high school levels whose APPRs are based in whole or in part on student performance on the grade 3 to 8 English language arts and mathematics assessments AND/OR on state-provided growth scores on Regents exams – regardless of whether their school district or BOCES is operating pursuant to §3012-c or §3012-d. The transition will result in two sets of APPR scores, one subcomponent/category scores that will continue to incorporate state-provided growth scores “for advisory purposes” (and therefore will entail no “consequences”) and composite scores; and a second, with subcomponent/category scores and composite scores and ratings that are adjusted to exclude restricted state assessment components.

The Regents item was unanimously supported by all board members, except for Chancellor Merryl Tisch, who expressed concern that the regulatory amendments would result in less “differentiation” across the HEDI ratings.

Though SAANYS supports the above regulatory amendments, we take issue with the contention that statutory revisions are unnecessary. It is our position that statutory revisions are necessary not only in regard to the above new regulations, but to revise other provisions of §3012-d, such as the weighting of the Student Performance Category in the determination of the overall composite rating. It is our intention to vigorously engage the governor’s office, legislators, and the State Education Department for appropriate statutory amendments of the state APPR system.

3. Annual Professional Performance Evaluation for 2014-2015 – The following statistical Information was presented regarding annual professional performance reviews completed during the last school year, based on §3012-c. 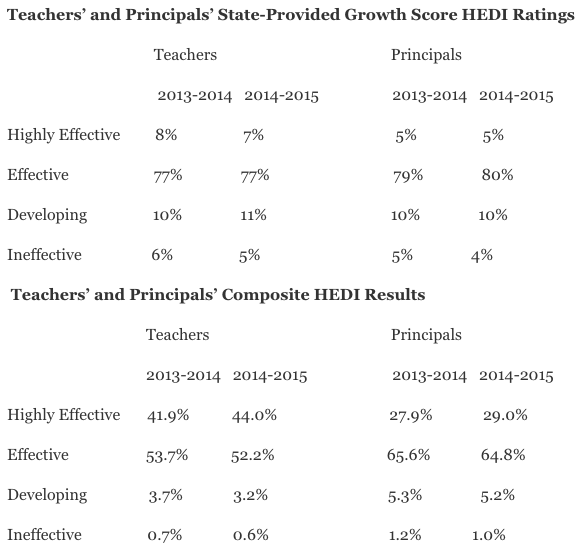 4. State Education Department Common Core Standards Survey – Commissioner Elia presented information regarding SED’s AIMHighNY Common Core Standards survey that was open from October 21 to November 30. The survey site was visited by 64,142 people, with 45,654 entering demographic information and 10,532 submitting at least one piece of feedback on the standards. The major takeaway from survey feedback is that approximately 71 percent of responses are supportive of the standards. Of the 29 percent of responses that did not indicate support of the Common Core Standards, most were focused on ELA and mathematics at the early grade levels. In a corresponding manner, the top five grades receiving feedback in mathematics were kindergarten, and grades 1, 2, 3, and 4; and in English language arts the top five grades were pre-kindergarten, kindergarten, and grades 1, 2, and 3. Most who participated in the survey were teachers (48.9 percent), followed by parents (32.8 percent), administrators (5.1 percent), and others (13.2 percent). The commissioner explained that in the coming weeks, SED will share the survey results with the English Language Arts and Math Content Advisory Panels, which are made up of educators from across the state.

The report of Governor Cuomo’s Common Core Task Force, SAANYS Testimony to the Governor’s Common Core Task Force, and the Regents item containing the proposed APPR transition regulations are posted on the SAANYS website. For additional information regarding the December meeting of the State Board of Regents, contact James Viola, director of government relations at JViola@ saanys.org.