Home > Newsroom > Summary of the April Board of Regents Meeting

The April meeting of the Board of Regents filled two, very  full days of meetings and presentations. The following provides a summary on some agenda items that may be of particular interest to school leaders. A full review of the Regent items may be found here.

An important issue for the board was the ongoing discussion on the ESSA State Plan. Each month the board has focused on one area of the State Plan. This month’s discussion was on the overall strategy for identifying low performing schools. This discussion follows the completion of the most recent round of regional meetings and the one-day intensive retreat at Mercy College. The goal of the discussion was to provide a policy framework for the identification of the lowest performing schools. A critical part of the discussion was the selection of indicators to identify low performance for accountability purposes. The Regents have discussed the concept of using tiers of indicators. Tier I would be required ESSA indicators. Tier 2 indicators would be used to inform continuous improvement and would be available across all districts and schools. Tier 3 indicators would include measures that the state would make available, and districts could choose to use to improve learning and teaching. Tier 4 would include indicators that schools and districts could adopt for their own purposes. However, individual indicator placement in one tier or another did not always equate with the level of importance that members of the board felt should be given to the indicator. For example, much discussion by  the board focused on the importance of civic readiness and measures of parent/community involvement. Each of those measures was very important to the board, but are placed in Tier 3 due to the type of indicator they are according to ESSA. Scott Marion from the Center for Assessment used an interesting framework for the Regents to use to guide decisions regarding the selection of indicators. The key questions that should guide decisions regarding indicators can be found below.

• Is this indicator required (federal or state)?

• To what degree can school personnel control changes in this indicator?

• Is this an outcome, input, or process?

• If schools improve on this indicator, what other downstream improvements should we see?

• What are the potential (unintended) negative consequences associated with using this indicator?

• Does this indicator add new information to the system?

• Does the indicator have sufficient technical and policy properties to differentiate among schools and be comparable, disaggregated student groups, avoid corruptible, and provide quality data?

Discussion points that school leaders may find particularly important are:

• The graduation rate indicator in Tier 1 is likely to include 4,5 and 6 year rates ,weighted equally.

•  The board is considering the use of a Seal of Biliteracy to identify schools successfully meeting the needs of students who read and speak multiple languages.

•  Several indicators in Tier 3 received much attention. Measures of student integration and measures of parent/community involvement and engagement emerged as very important to the board members. Some of the discussion stemmed from a report by the UCLA Civil Rights Project (2014) that identified New York State schools as the most segregated in the nation. Deep concern and possible interventions were discussed, one of which relates to the identification of an indicator used for accountability purposes. A set of the indicators that was discussed may be found here.

The next decision point discussed was the best model to use for identifying low performing schools using the selected indicators. The board reached consensus on a model that identifies levels of performance, rather than weighting indicators and assigning a numerical average. The model selected would identify Title I schools with very low achievement levels, followed by a performance using growth indicators, and other indicators selected for use (perhaps five high priority indicators). The various assigned levels would result in an overall rating level that captures school performance across the included variables. 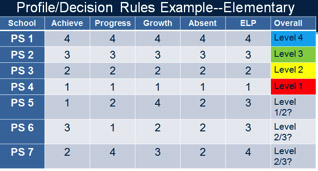 Next steps for the ESSA State Plan will be unfolding quickly, as a draft will be submitted for discussion at the May meeting. Prior to that date, a series of at least 13 public hearings will take place around the state. The hearings will be open to the public and those attending, who wish to speak, will have an opportunity to sign up for a time slot prior to the commencement of the public hearing. Additionally, the public may submit comments directly to NYSED via email or postal delivery. SAANYS strongly encourages all members to participate in these public hearings and send in written comments. More information on the dates and times will be forthcoming and available on the SAANYS website. We will also provide summary positions from our membership perspective once the draft State Plan is available. This is a very timely and important opportunity, which will affect district positions and actions for many years.

Prior to discussing the item, the board discussed the evolution of the nomenclature used by NYSED to capture student English language performance. In the past, the term Limited English Proficient (LEP) had been used to identify students needing support for reading and speaking English. This term was replaced with English Language Learners(ELLs), that belter captured the process of learning a new language in our schools. As our state demographics change, it has become clear that many students are proficient in many languages and are learning English. One term being used by NYSED to capture such students is Emergent Multilingual Language Learner (EMLL).

The item on the identification of language learning needs of students in prekindergarten was discussion only and summarized the work and recommendations of the Committee of Bilingual Education in Prekindergarten Programs. The initial segment presented a summary of pertinent demographic data. 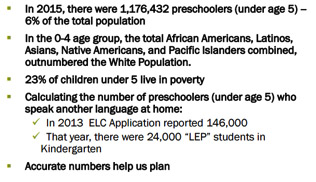 The concluding portion of this presentation focused on the need to establish a protocol, rather than one new instruments of evaluation. The protocol would include; a language profile, family interview and social history, interview with the child, review of existing screenings, and  an instructional plan. Embedded within this process would be a transition plan to kindergarten. Next steps for this work may include possible revision to Part 151 of the Regulations of the Commissioner and development of guidance on the EMLL language identification protocol.

The board heard a presentation from representatives from Hunter College on the benefits of a new teaching certificate in computer science. Currently, there is no certificate in this area and training is limited to professional development  or personal skill acquisition. The discussion provided information on the need to formalize the content and pedagogy unique to computer science.

Strategic Plan for the Arts

The current standards used for the Arts were adopted in 1997  and in 2012 the National Coalition for Core Arts Standards developed new standards. Representatives from New York were represented on this Coalition and since then NYSED and the field have been engaged in several initiatives to review the new standards. From this work, a strategic plan for the arts was adopted. The plan will include, among other initiatives, adopting the revised NYS Learning Standards for the Arts and develop an Arts Pathway Assessment System process.

Please contact Cindy Gallagher, director of government relations with any questions or comments at cgallagher@saanys.org or call 518 782-0600.