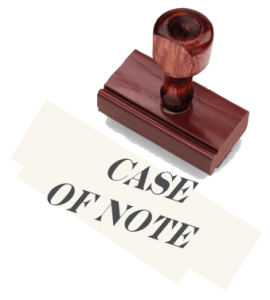 Mike Tweed, a probationary Long Island administrator and SAANYS member, exposed a cheating scandal in his school district. Instead of being granted tenure based on his exemplary service, Tweed was retaliated against for reporting the criminal conduct by being denied tenure. During this time period, Tweed’s administrative unit was not affiliated with SAANYS, however, Tweed fortunately was an individual member and sought out SAANYS General Counsel Art Scheuermann, a former Suffolk County prosecutor, to defend him against the illegal action taken.

In New York, it is extremely rare for probationary administrators to successfully challenge a denial of tenure. In the last known case, in 2003, SAANYS successfully tried such a case entitled, Kunjbehari v. Wyandanch Union Free School District, in Suffolk County Supreme Court, in which a building principal was wrongfully denied tenure after a fourth year of probation. It was proven at trial that the superintendent and board of education had discriminated against him because of his union activities.  In that case, the principal received almost one half million dollars in back pay and benefits.

In the current case, several litigations were employed.  First, SAANYS grieved the district’s termination decision because the school district had failed to follow the collective bargaining agreement’s (CBA) evaluation procedure. This litigation culminated in the recent arbitration award that is the basis of this article. And, second, SAANYS filed a federal constitutional lawsuit against the school district and individually sued the superintendent and every member of the board of education for their egregious conduct. The lawsuit is scheduled for trial in June of 2016.

Concerning the arbitration case, the administrators’ CBA required the evaluation of non-principal administrators to follow the following procedures: (1) to jointly developed goals by October 15; (2) to provide continuous formative evaluation and feedback throughout the school year in the form of one-on-one evaluation meetings; (3) to document by written memo any serious performance issues that could result in a negative evaluation; and, (4) to issue a final annual evaluation.  In conjunction with these specific contract provisions, Scheuermann also relied on past practice and relevant board policies to show that the school district treated Tweed like a pariah in following the established evaluation procedure for administrators.

For example, both the superintendent and Tweed’s direct supervisor, an assistant superintendent, failed to meet and jointly agree on mutual goals by the contractual deadline, as had been done in Tweed’s two prior probationary years of employment. From the start of his tenure-bearing year, Tweed noticed a difference in his evaluators and how the evaluation process was being largely ignored.  Tweed’s direct supervisor failed to schedule the goals-setting meetings over the summer as was done in his prior two years of employment. Unlike prior years, Tweed’s goals were not finalized by the end of the summer. Instead, Tweed’s jointly developed goals were late by over two months and were only completed on December 20, 2014. The two month delay was a clear violation of the contract.

Despite the lack of documented performance issues, the superintendent denied tenure based on five trumped-up performance deficiencies. The arbitrator, Robert Simmelkjaer, saw through the baseless reasons for the denial of tenure and found that Tweed’s supervisors’ lack of calendar entries and documentation demonstrated different intentions. As the arbitrator wrote:

[I am] . . . not persuaded the administer could have amassed five (5) performance issues ostensibly unrelated to his jointly developed goals that did not rise to the level that “could cause a negative final evaluation,” yet collectively warranted a negative tenure recommendation. Inconceivably they failed to document anything.

Accordingly, Arbitrator Simmekjaer found the district failed to document Tweed’s alleged performance concerns and found a third violation of the CBA’s evaluation procedure.  Given the clear and convincing evidence that Tweed’s evaluators failed to comply with the CBA, past practice, and pertinent board policy, Arbitrator Simmelkjaer ordered Tweed be reinstated to a fourth year of probation, be awarded back pay and benefits, and directed to be made whole because of the school district’s violations of the CBA.