Representing New York State’s school administrators, SAANYS was invited to deliver testimony before the Senate Finance Committee and the Assembly Ways and Means Committee on February 14 regarding the 2017-18 Executive Budget. Read that full testimony here.  Below is a summary of that testimony.

At a Glance: SAANYS Position on the Governor’s Proposed Budget

On February 14, 2017, the Senate Finance and Assembly Ways and Means Committees held a joint session to hear testimony on the governor’s proposed education budget. In addition to Commissioner of Education Elia and Chancellor Farina of the Department of Education for NYC, many associations presented testimony on behalf of their respective membership. The following is a summary of SAANYS’ written testimony:

The governor’s proposed budget falls short of projected costs needed by districts to maintain current programs and services as projected. SAANYS is a member of the Educational Conference Board (ECB) which estimates that district costs will rise by $1.7 billion or about 2.6 percent. A request for an additional $1 billion, over the amount proposed by the governor, is needed to ensure that districts can maintain current levels of programming.

The proposed budget removes the use of the foundation formula developed following the Campaign for Fiscal Equity (CFE) court case. That formula provided a stable way to develop district allocations and drive the greatest amount of aid to districts most in need. Abandoning the foundation formula, would mean that future state aid to school districts will be based on 2017-18 allocation with one time increases as determined by the governor. SAANYS strongly opposes the repeal of the foundation aid and supports a commitment to a three-year phase-in of the current formula. It is essential that school leaders have a stable fiscal structure so that they can adequately prepare for needed programming and services.

The 2 percent tax cap has not been 2 percent for the last four years (see graph below). This year’s cap is set at 1.26 percent. The property tax cap is based on the lower of 2 percent or the Consumer Price Index (CPI). The CPI is based on the average cost of items such as food, clothing, shelter, fuel, transportation fares, and charges for doctor and dentist services, and many other costs that are bundled together to provide an average percent. 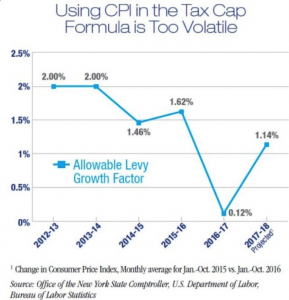 SAANYS recommended that the property tax cap be set at 2 percent or the greater of 2 percent of the CPI. Reinstating the foundation formula and a setting the tax cap will increase stability in terms of being able to predict future state operating aid operating.

SAANYS advocated for the following priority areas, should funding be increased:

On average, districts in New York saw a 22 percent increase in English Language Learners (ELL) or Multi Language Learners (MLL). Many of our colleagues on Long Island and other pockets of our state have seen percentages well above the 22 percent average. Meeting the needs of English language learners requires additional staff, academic supports, assessment modifications, and other support services. SAANYS recommended the following:

Access to career and technical education is an important path for many students. Over 93 percent of students enrolled in schools with CTE programs graduate from high school, while the graduation rate for all students is approximately 79 percent. Therefore SAANYS recommended:

While SAANYS is supportive of community school funding, we are cautious that proposed funding is a set aside within foundation aid allocations. SAANYS recommended that all previous aid be released to districts owed previously allocated community schools funding, and that the foundation aid be distributed in a fair and balanced approach.

The governor has proposed a $5 million increase for pre-kindergarten, as well as a process for merging the current seven funding streams that support various versions of pre-kindergarten programs. SAANYS concurs with the goal of blending the programs but also recommend that:

On your behalf, SAANYS requested that both the senate and assembly support an education budget that provides stability, sustainability, and support. Educators across the state need a firm and stable foundation on which to make improvements and anticipate student needs. When the fiscal foundation is undermined, educators have fewer and weaker tools on which to build a solid structure. Our school leaders need to rely on the state policymakers to provide them with the fiscal resources to implement programs that we have made priorities.