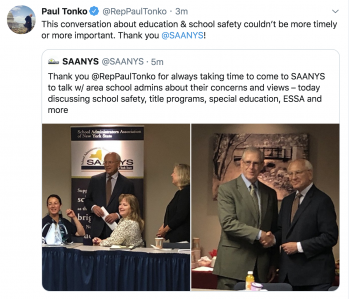 On August 13, 2019,  SAANYS was honored to host a conversation with Congressman Paul Tonko and administrators from his district. We are very appreciative of the time the congressman takes to listen to the issues that are of importance and concern to school district administrators. The discussion was far reaching and provided Congressman Tonko a clear perspective of how many federal and state level issues look at the local school district level.

Issues on school safety and the complex needs of students and their families were the focal point of many of the topics discussed. One of the first issues discussed was the new Red Flag bill that goes into effect this next school year. An increasing numbers of states are considering the adoption of Red Flag bills in response to the multiple mass shootings across the nation. New York’s law will be among the first to be implemented. Of concern to administrators attending the meeting was the determination of criteria used to discern whether persons were of danger to themselves or others in order to trigger an application to the courts to remove firearms from the person’s home or to preclude such persons from purchasing weapons. There is likely to be inconsistent criteria used if each district develops their own criteria and questions arose as to how courts would deal with such inconsistencies. Congressman Tonko was very interested in this topic and proposed that he would discuss this further with the NYS Assembly for further clarification.

A second area discussed was a blend of increasing needs of students and their families and immigration. Many of the administrators had newly arriving families and discussed meeting the needs of such families is very challenging. Many of the administrators discussed how much of their time was spent on coordinating community agencies, spearheading funding drives, working with businesses and piecing together networks to meet the critical needs of newly arriving families. Administrators talked of “drives” to supply shampoo, personal care items, razors, food, as well as school supplies. Many of these families are not receiving assistance from public programs, as the community and settled immigrant families are their primary sources of support. A part of this discussion also centered on the rising food insecurity experienced by students and their families. Even though some of the districts are considered low need districts, the pockets of poverty is growing for many districts. Some of the points made by suburban districts were that even though the district is labeled as low need, in actuality they are highly rural in many parts of the district.

A third area discussed was the increased use of vaping and e-cigarettes. Administrators discussed their frustrations of having decreased the prevalence of smoking on campuses only to see the rise of vaping. Use of vaping was witnessed in students as early as in elementary grades and attributed this to the way e-cigarettes are marketed using flavorings that appeal to younger students. Congressman Tonko was very interested in this topic and thought that his work with Energy and Commerce Committee should examine the marketing of such products more in-depth.

Lastly the topic of vaccinations was raised. This will be the first school year when all students must be vaccinated to enter school. The only exemptions that will be accepted are medical exemptions, as religious reasons are no longer allowed. School districts are experiencing a wide range of challenges and there is the anticipation that there will be a rise in the number of families requesting home instruction. This may result in challenges regarding transportation and the use of alternate settings for instruction.

Thank you Congressman Tonko (and staff) for your time and interest in our educational challenges.