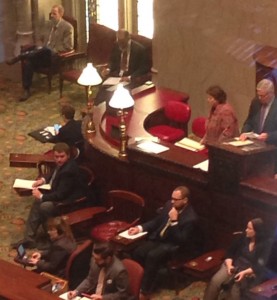 On March 9, four teams of school leaders from the SAANYS Government Relations Committee lobbied 16 legislators. Ranking and minority members, and legislators of both the senate and assembly were included in our meetings. Discussions focused on the proposed Executive Budget and its potential impact on districts.

The high priority items discussed were:

• Increase the  tax cap to a fixed 2 percent or the greater of the tax cap or CPI.

• Do not repeal the foundation  formula.

• Increased access to CTE programs so that all students graduate prepared for careers.

As time permitted, items related to the NYS ESSA State Plan were also discussed. Our members advocated for a State Plan that :

• Ensures  that 3 percent of the Title IIA funding is targeted to professional development for school leaders is consistent with current law and regulation.

Overall, the discussions were very productive, with most legislators indicating support for an increased amount of state aid over the amount proposed in the Executive Budget. Additionally, there seemed to be a  favorable response for maintaining a predictable foundation formula  for generating state aid to districts.

Following meetings with the legislators, the Government Relations Committee team met with Commissioner Elia and staff for approximately two hours. The commissioner was very gracious with her time and was committed to discussing many items with the group. The range of issues included: services for ELL students, pre-kindergarten, ESSA, curriculum updates, computer-based testing, and VADIR/DASA. SAANYS members provided excellent examples of district successes and articulated current challenges for administrators.

Many thanks to the GRC members for their time and commitment to making sure that important perspectives school leaders is thoughtful, insightful and very well articulated.